“We started to receive complaints in 2007. The family in question lived in a three-bedroom property in a relatively new scheme in Lincolnshire. It all started out as low-level antisocial behaviour. The two children were outside without supervision, being noisy, that sort of thing.

As time went on, problems started to escalate. They were letting tyres down, throwing eggs at windows, putting them through letterboxes. There was some substance abuse by the parents, too.

We were part of lots of multi-agency work, trying to implement a number of preventative measures to solve the antisocial behaviour. Regular multi-agency meetings took place to discuss the case and we tried everything we could.

Unfortunately, nothing worked and we were left with no option but to go down the legal route – in total, there had been 29 different complainants over the years.

We initiated possession proceedings and we had a number of witnesses who were prepared to come to court and give evidence. Before this went to trial, there were further interventions offered from other agencies involved. It was considered that it was only reasonable to allow the family further opportunity to sustain their tenancy so a suspended possession order was agreed.

This meant the family had to adhere to a number of conditions, otherwise the order could be enforced and they would be evicted.

The customers who came to court with us made the biggest difference. We made sure they were looked after and I truly believe that without their contributions, we wouldn’t have achieved the outcome we did.

The family continued to breach the order and we were left with no other option but to return to court and at this point, we had about half a dozen customers who wanted to stand up in court and have their say.

They all gave powerful accounts of the behaviour that had been going on for a number of years. Even the judge praised their contributions.

We were granted the possession order and ultimately received a bailiff date.

When that date came along, the customer had put in a very late suspension request.

This meant we had to go back to court that morning to argue why the eviction should go ahead.

Thankfully, the judge agreed that our possession order remained reasonable and proportionate and the eviction did go ahead.

Our customers were so grateful that we had managed to deal with this family.

The amount of preventative work and multi-agency partnerships that went on before we got to court was incredible but necessary as we were taking legal action against a family.

As a landlord, we had been reasonable to all parties involved. We had taken proportionate actions but ultimately, the impact on the community had been so huge, we had to take the case to court.

The customers who came to court with us made the biggest difference. We made sure they were looked after and I truly believe that without their contributions, we wouldn’t have achieved the outcome we did.

This case goes to show that we will try and implement preventative measures to tackle anti-social behaviour before turning to the legal avenues. However, customers should know that we are fully committed to dealing with these problems and will work with victims to achieve solutions.”

We always want to make sure we are providing the best service we can to our customers - that’s why we welcome your feedback. In this edition, we look at our most recent performance relating to the reporting of anti-social behaviour between August and September 2019. 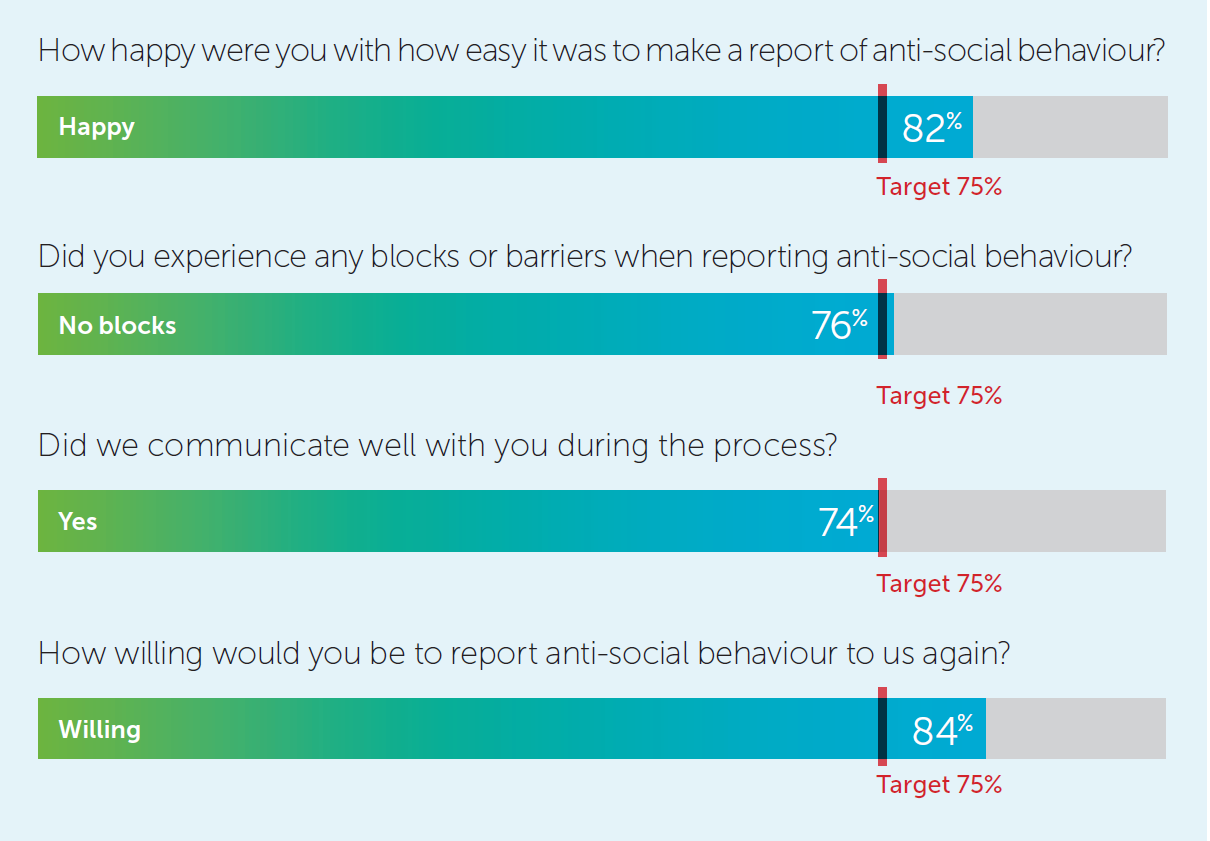 For more information on ASB, please visit our dedicated page

Please use the form below to report anti-social behaviour to your local customer services team. If you are unsure which team to contact, please click here.