AN Eritrean businessman who suffered oppression in Africa has rebuilt his life in the UK after receiving significant support from Friendship Care and Housing (FCH).

Mebrahtom Weldemikall (45) fled his homeland in 2008 and, after discovering refuge in England, he later found a home and employment in Birmingham.

Determined to improve his quality of life and to give his family the best chance of succeeding in the UK, Mebrahtom met with FCH’s Employment and Training Advisor, Rob Friday, in 2014 and started the long and winding, obstacle-filled road to becoming a private hire driver.

“Rob has been very important to my life,” Mebrahtom said.

“Thanks to him, I’ve been able to settle in the UK, to relax and enjoy life again. He’s helped me with everything. My home, getting child tax credit for my children and getting work. He has changed my life and helped me so much. Rob is not like a friend, here’s more like a big brother to me.”

The owner of a successful import and export business in his homeland, Mebrahtom’s world was turned upside down following his country’s border war with Ethiopia, which first began in 1998.

With most of his stock trapped across the border, Mebrahtom lost thousands of pounds to the government and, unable to reclaim his money, he left the country. Taken prisoner in Libya during his journey to Europe, Mebrahtom was later released and sought refuge in the UK. As soon as his official papers came through, Mebrahtom accepted whatever work he could find. 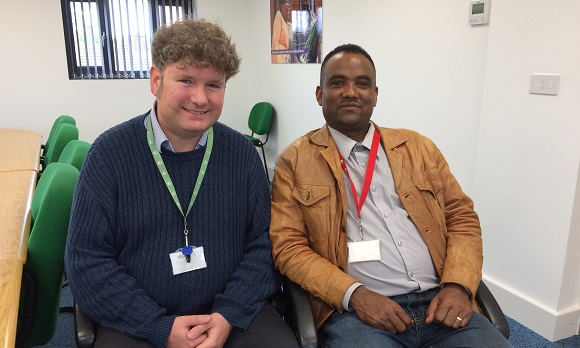 “It was very difficult at first,” he said.

“I went straight into work and had to learn the language. My first job was at an ice cream factory. The job wasn’t difficult but it was hard because I didn’t understand or speak English.

“I also did cleaning jobs and worked in a car factory, putting different components together for the windows. I soon found the work easy and the managers had to tell me to slow down because I was making other workers look bad!”

He later signed up to the Job Centre’s Work Programme. But out of work for two years and determined to better himself, he contacted Rob in 2014 and began working and volunteering.

That determination and work ethic has been evident in everything Mebrahtom has done since; from enrolling in college to learn English as soon as his family joined him in the country, to his determination to become a private hire driver.

“I could’ve carried on working in factories, speaking and understanding very little English, but I wanted to improve myself, get a better job and make life better here for my family,” he said.

Mebrahtom passed his driving licensee and then had to wait a further two years before he could take his private drivers’ test, including the knowledge test.

“That was very difficult,” he said.

“I could not have completed that without Rob explaining what it all meant. We did quizzes where Rob asked me different questions. It helped that he was so relaxed and spoke slowly to make sure I could understand everything.

“When I found out I passed my oral knowledge test I phoned Rob straight away. I’ll never forget how happy he was, clapping and cheering down the phone to congratulate me!”

Determined to improve his English, Mebrahtom sought out private lessons with a friend of Rob’s, who agreed to provide them free of charge. He also volunteered at a charity shop, as part of a window cleaning local enterprise and at a local foodbank to get used to speaking to new people.

Touched by the ‘very important service’ the foodbank provided to the local community, Mebrahtom even donated £50 to the charity after receiving his first pay cheque as a taxi-driver.

“People in England are very kind,” he said.

“I don’t know how they help all the people they do. They look after you and you are able to live a good life. My family are very happy. In the UK if you want to work, you can. You can get a house; you can get education; you have the power. I just work as hard as I can.”

Rob has been there every step of the way for Mebrahtom, meeting him 80 times in the space of 18 months. Those meetings included job interview tips, CV writing assistance, and translating complex forms.

“The process to get to where he is now has been far from plain sailing”, Rob explained.

“There seems to have constantly been a new obstacle placed in front of Mebrahtom. From learning English to passing his driving test and gaining the local knowledge, it has been challenge after challenge.

“I’ve been extremely proud of how Mebrahtom has overcome each of the barriers he’s faced. He’s never given up and worked incredibly hard to get to where he is today. We’ve worked together well as a team and I’m very happy that I’ve been able to help him.”

If you are a FCH customer looking to get back into work or trying to improve your career prospects and need some help, contact Rob Friday on 0300 123 1745.