The developers of a 400-unit site on Humberston Avenue in Grimsby are set to remove a spoil heap after listening to the concerns of local residents.

Keystone Developments, part of Longhurst Group, and Westleigh Partnerships, have today started work on rectifying the problem after recently being made aware of the issue by local councillors.

Residents, including those living on nearby Glebe Road, Lime Grove and Adlard Grove, registered their dissatisfaction with the appearance of a significant soil heap, a large pond and some other elements of the site. Deemed as an eyesore and as obstructing the view from certain properties, locals reported the problem to several councillors.

The issue was aired at a recent event to celebrate the progress on the site which was attended by Cleethorpes MP Martin Vickers, Mayor of North East Lincolnshire Ron Shepherd and local ward councillors Stan Shreeve, John Fenty and Stephen Harness.

Councillor Harness was particularly keen to pass on the feedback he’d received from local residents and urged developers to find a resolution.

Initially measures had been taken to cover the spoil heap and now, a little over two weeks since the event, work will begin on moving it and connecting a ditch to the existing pond system.

Nick Worboys, Longhurst Group’s Director of Development and Sales, said: “As soon as the mayor and other councillors made us aware of these issues, we began investigating ways that we could bring this part of the development forward.

“Working closely with Westleigh, RJA Consultants and the on-site contractors, we have been able to find a sensible resolution. Thanks to the good will and flexibility of all involved, I’m delighted to say that work will today commence on rectifying the problem.

“Issues like this show how crucial it is for developers to maintain a good working relationship and open lines of communication with the local authority and just how important it is to listen to any concerns the community may have.”

Councillor Stephen Harness, added: “Longhurst Group have responded to the complaints raised by the Humberston residents relating to the 'spoil heap' very professionally. It is to be welcomed that the 'spoil heap' is being relocated and I would like to thank Longhurst on behalf of the residents for this response.”

Keystone’s flagship development, Carrington Gardens and Humberston Meadows, is being delivered as part of joint venture with Westleigh.

When completed, the development will offer a mix of 200 family homes on Humberston Meadows and 200 luxury-living properties for the over 55’s across the Carrington Gardens site.

Having started on site in February last year, the first phase of Carrington Gardens is now well under way, with a number of homes having already been reserved by eager residents. 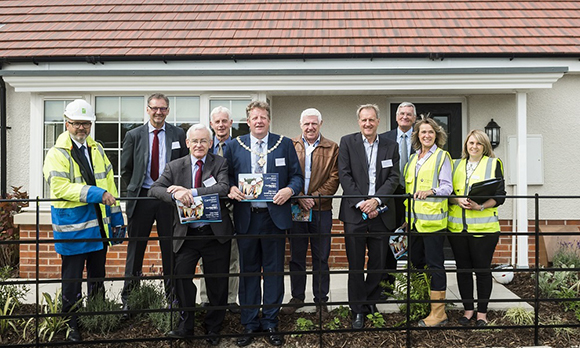