We’re delighted to announce that 14 customers and community organisations have been crowned as Community Heroes Awards winners for 2021.

We invited nominations from customers and colleagues earlier this year and we were delighted with the response.

Having gone through each and every one, we’re honoured to have been able to present our winners with a hamper and certificate.

The Residents R Us community group on Beechdale in Walsall has also been named a winner – with volunteers and members having a buffet lunch provided as an alternative prize.

Sue Crask, Community Investment Lead, said she was humbled by some of the nominations received.

She said: “First of all, I want to say a huge thank you to everyone who submitted a nomination this year.

We’ve received some truly humbling entries and some of the stories of what our customers have been doing in their communities are wonderful.

“It’s been a tough year once again, but as the winners of our awards show, there’s some great work being done in the community to help the more vulnerable or isolated.

“I hope all our winners enjoy their prize.”

One winner is Ron Davies, from Beechdale in Walsall. He’s spent the last couple of years making wellbeing calls to other isolated and vulnerable residents on the estate.

He started this voluntary role after losing his wife Doreen after more than 60 years of marriage.

Ron said: “It’s a surprise to me and my daughter, as she’s wary of me doing too much at my age. I’m 87 now but I’m happy doing it as it means I’m not sitting in the bungalow on my own.

“Even if I’m sat here, I’m keeping active by speaking with people. I’m also still volunteering up at the centre. 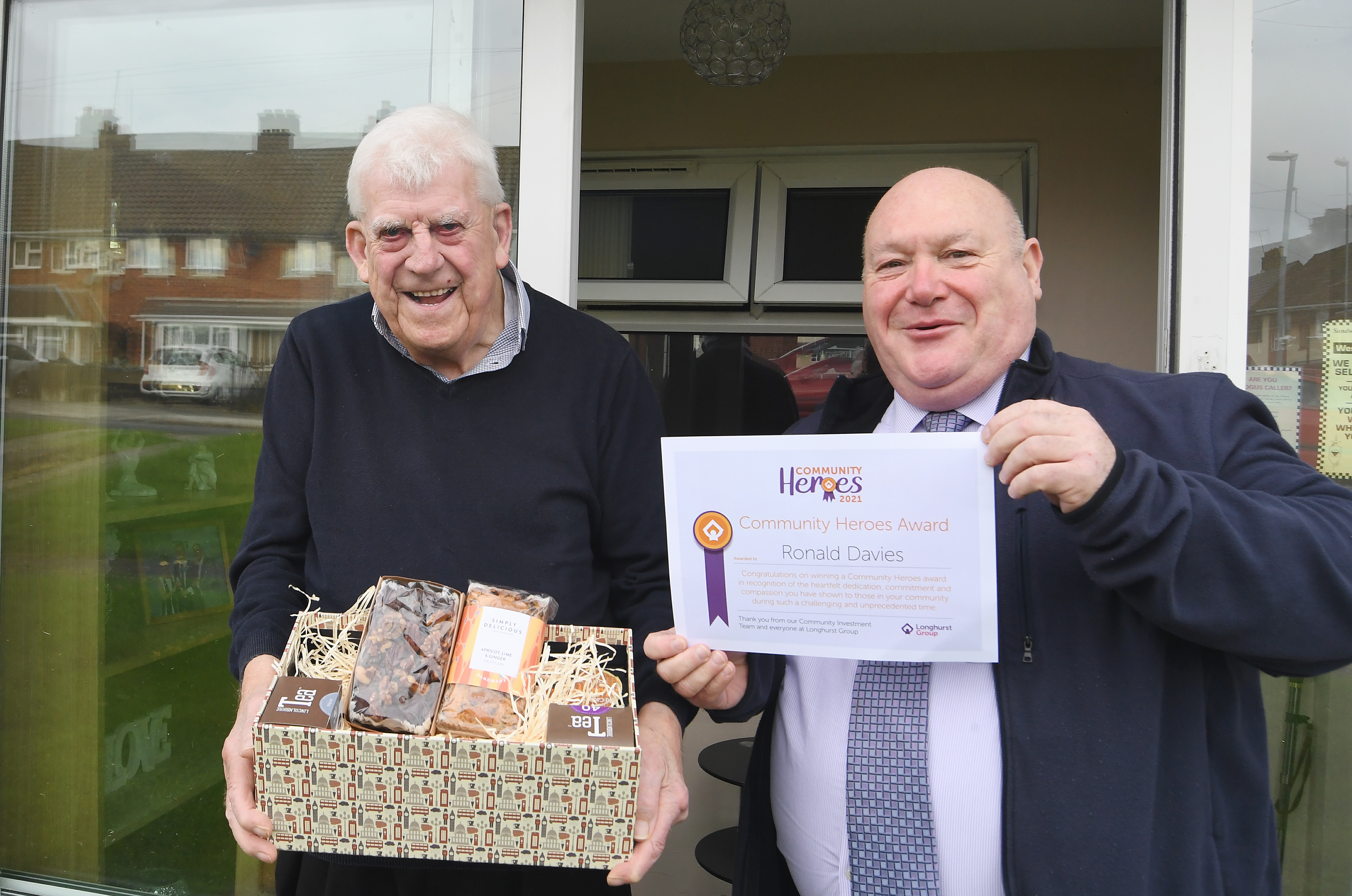 It’s a surprise to win this award, but it’s also very warming to know that people value what I’m doing. Some of the people I call even call me back out of the blue because they enjoy the chats.

“As long as I’m able to keep going, I plan to carry on with it.”

Sue added: “I can’t believe I’ve won this award – and one for the group as well. I’m so overwhelmed and chuffed. 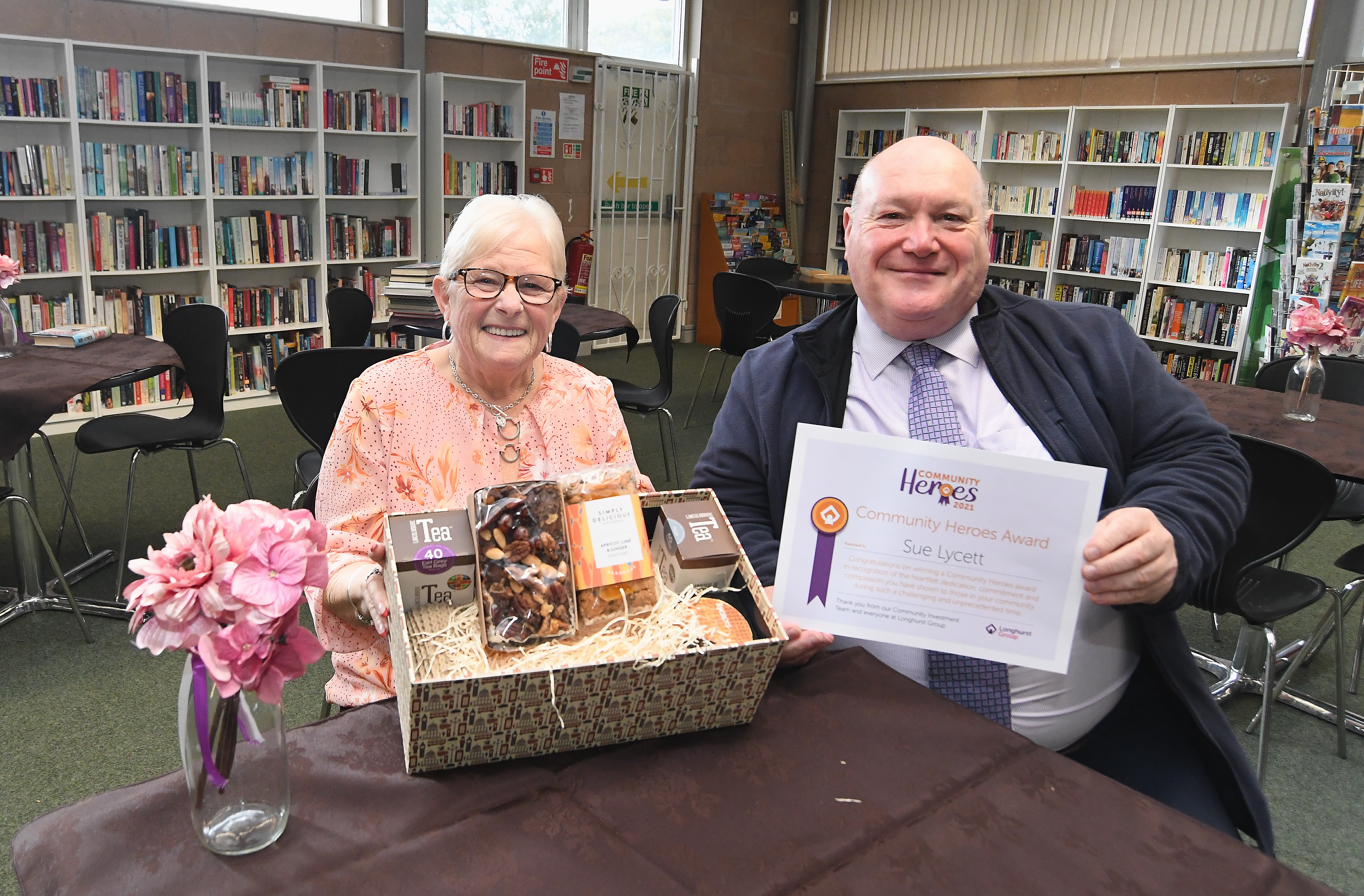 “I obviously couldn’t do what I do without the members and volunteers of Residents R Us. They’re all fantastic and help and work with me every day. 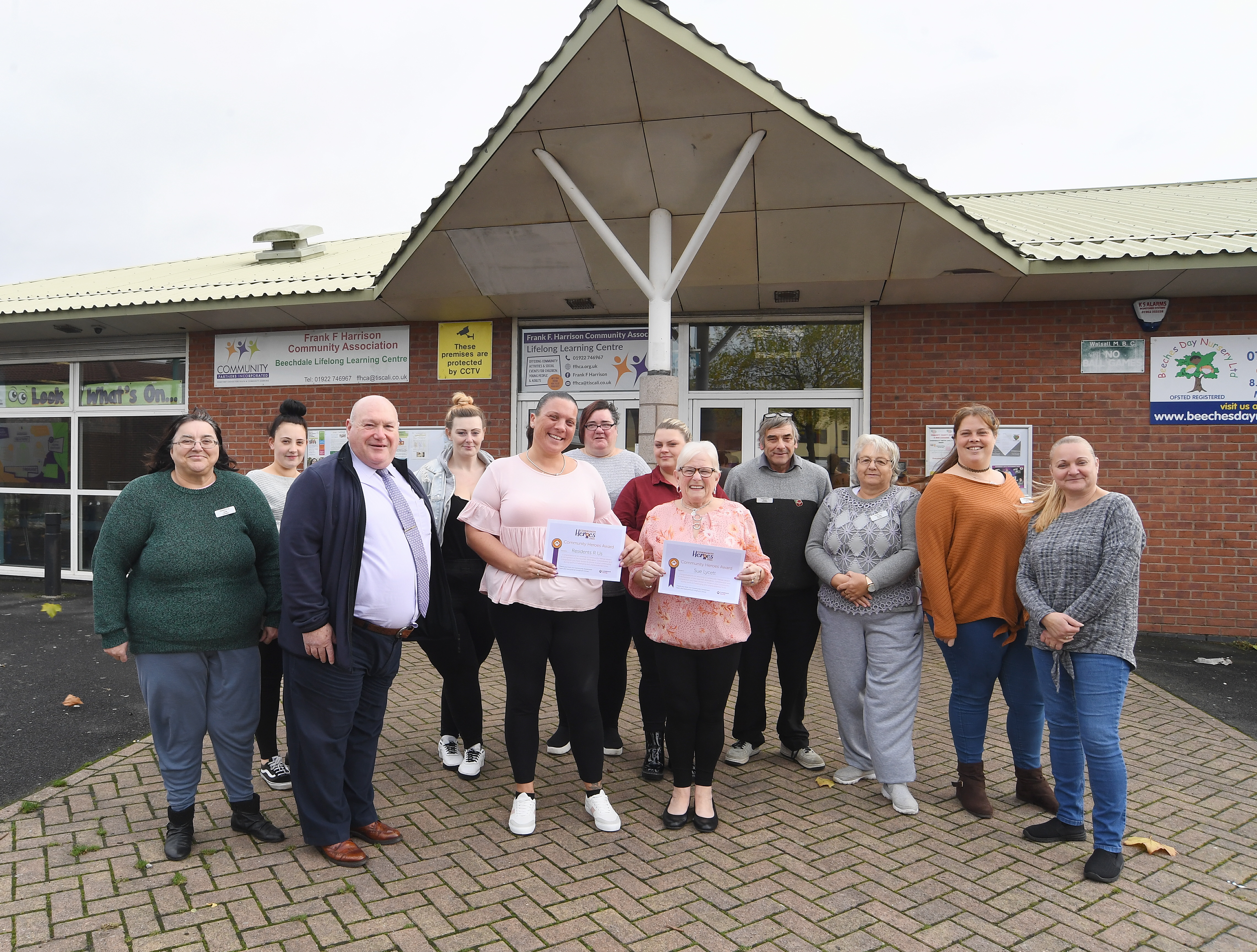 I’m proud of each one of them for their loyalty and support and we’ve even become great friends.

“I’d just like to say thank you from the bottom of my heart.”

Mavis Yaxley, from South Bretton, Peterborough, was also named as a Community Hero. She goes above and beyond in helping neighbours and also keeps an eye on the scheme when colleagues are not on site.

She said: “I was shocked and surprised when I was told I’d won – it was a lovely feeling!

“I probably get the sense of wanting to help from my grandmother – she used to go around helping people all the time. If I see people struggling, it just feels right to go and help them. 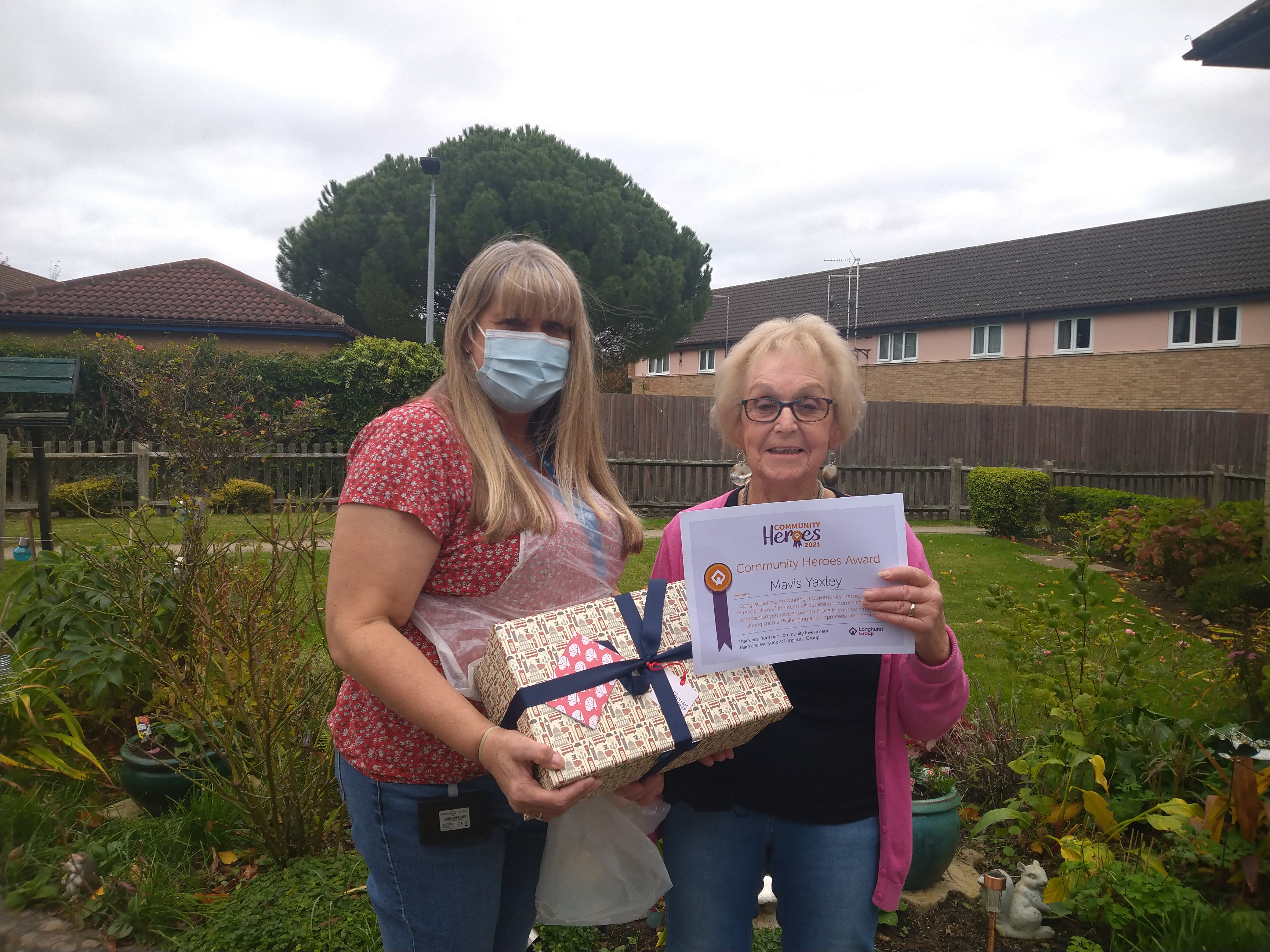 It’s not nice seeing people struggle, so you don’t think twice about it, it’s just something you should do.

“If you were in the same situation, you’d like to think somebody would help you, so I can’t just walk away.

“I’m so grateful to have my name put forward. You don’t think anything of it when you’re doing these things, then when somebody rings you up to say you’ve got an award, it’s wonderful.

“I just do it as I think it’s the right thing to do, not to win any prizes.”

The winners in full

David has helped several residents through minor DIY tasks as well as the more serious including calling ambulances for others in need. He’s helped customers maintain their independence by fixing mobility scooters and nothing is ever too much for him.

Steve has helped customers by building mobility aids for them, saving time and money and helping keep them safe. He’s supported others when they’ve had falls and called the emergency services. He’s never afraid of spending time with other people.

Deborah is a great support to residents. Despite working herself, she always finds time to help other residents with day-to-day tasks and is always there to provide support when needed.

Ron has volunteered to make wellbeing calls to isolated and vulnerable residents on Beechdale estate in Walsall. He continues to keep in touch with them despite having had Coronavirus himself.

Over the last year, Brenda has really helped and supported a customer by visiting them and keeping in contact daily, and also doing their weekly shopping for them. She’s also supported her Scheme Manager during these difficult times.

David has helped his elderly neighbour by cutting his grass and having regular chats with him. David also helped in an emergency where there had been smoke coming from the neighbour’s property. He stayed with the customer, opening windows and clearing the smoke from the property.

Elizabeth has helped a few of her neighbours, going above and beyond by cooking, doing their shopping and spending time with them chatting. She’s also ensured their homes have been secured at night and she’s also ensured any repairs that need doing have been reported.

Emily has always wanted to be involved in community activities and she set up her own litter picking group. They recently completed their first community litter pick at a local park, before heading back to Emily’s home for refreshments and the presentation of certificates that Emily gave to all volunteers.

Harry has been creating his own artwork which has then been transferred onto t-shirts. He’s then been selling these online to raise money for the RNIB.

Sue has led the Residents R Us community group on Beechdale in Walsall for several years. She’s helped launch a new community shop on the estate for residents and regularly helps arrange day trips for children and their families. The group as a whole – especially their volunteers – have also been named as a Community Hero.

Rob heard distressed shouts from a customer who’d fallen in their home in the early hours of the morning and called an ambulance. Despite being due to travel to London, he stayed with the lady after being told an ambulance could be up to 10 hours away after returning to his home and activating his cord to speak to the call centre for help.

Mavis has been helping other residents during the pandemic continues to do so. She’s been out doing shopping for people and is the perfect example of a good neighbour. She also keeps an eye on the scheme when colleagues are not on site, reporting communal repairs and looking after a part of the communal gardens.

Abigail has looked after a lady throughout her pregnancy, providing support in many ways, including baking, cooking dinner and going shopping for the lady when she’s not been able to go outside herself.

In 2020, colleagues were encouraged to nominate those who’d done something during the year that made a difference to their com…