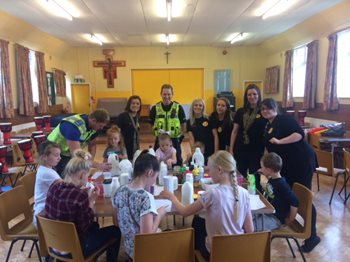 CHILDREN on a Walsall estate are dancing to the beat of their own drum thanks to an African-themed volunteers project supported by Longhurst Group staff.

Jembies Drum Café, which is based at the Church Hall on Edison Road on the Beechdale Estate, helps youngsters to build confidence and have fun through the playing of African music.

The free sessions give visitors, aged between four and 12, the chance to play traditional African drums, tambourines and didgeridoos while learning about the African culture.

Young people are also encouraged to express themselves through drawing, singing and dancing as well as fashioning their own instruments from recycled materials.

The project was launched by Jemma Betts, herself a resident of the Beechdale Estate, who works for Friendship Care and Housing (FCH) as a community champion.

Supported by FCH, which is part of Longhurst Group, Jemma founded the group in response to the loss of other community groups in the area due to funding cuts.

She explained: “Before we launched the Café, there was very little for young people on the estate. Local dance groups and other activities had to close down because of a lack of funding and so we decided to do something about it.

“The Café is for absolutely everyone on the estate. It helps prevent young people hanging around on the streets and reduces the potential for anti-social behaviour.

“It’s not just about playing the instruments – although they do have plenty of fun doing that – it also teaches young people about a different culture and helps to build their confidence and aspirations for the future.

“The Police and Crime Commissioner and local PCSOs have attended sessions in the past and they were fully in support of what we’re doing.

“It’s going from strength-to-strength and that’s really encouraging. Hopefully it can continue to grow and more and more young people will get involved in the future.”

Five of Jemma’s FCH colleagues also volunteer at the project, which holds sessions twice a week; on Saturdays from 12-1pm and Mondays from 6pm-7pm.

Jade Smith, whose children Mason and Layla regularly attend the Drum Café, said: “Since being at Drum Café there has been something new and exciting for the children to look forward to; they can’t wait to go there every week.

“I have seen massive improvement with the children’s confidence since going; we never miss a Drum Café session!”